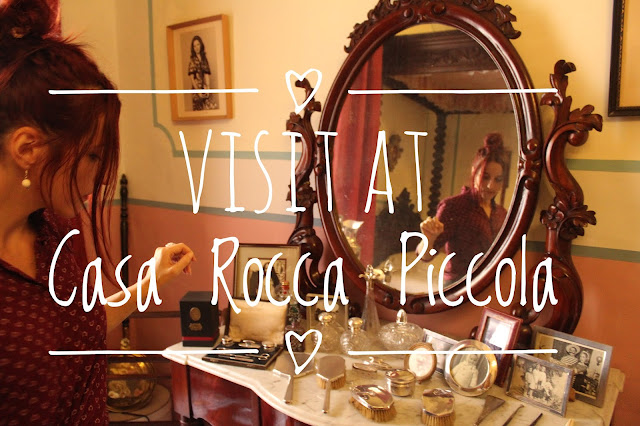 Casa Rocca Piccola is a museum palace of a noble Maltese family, dating from the 16th century. It has been on my list for a long time, and finally, I visited it. It was an interesting trip back in history.

I went with my friend, and I had my camera. This palace is located in Valletta down Republic Street. No way that you could miss it, there are big flags waving saying "Casa Rocca Piccola". You can buy the tickets inside for 9 euros per person. You also get a tour guide. Backpacks were not allowed, since you can break something. So I had to leave mine in their old locker.

This house was built in the time while Valletta was building, in 1580 to be more precise. Since then it was the home of the noble Maltese family De Piro. The house - the palace is one of two houses built by  Admiral Don Pietro la Rocca. At that time this was the only house that had a garden, and it was called  "la casa con Giardino". The first lord was a merchant who was very rich and he traded around the Mediterranean Sea. The house was inherited over the years and there is a long history behind it. In the beginning, it was much bigger, but in the 18th century, it was divided into two houses. Today the members of de Piro family has converted the palace into a museum that attracts many tourists. The palace is amazing, and it is a wonderful idea of being a museum house.

I will take you on a walk around Casa Rocca Picola through the pictures I made. If I had a whole day here, and If I was allowed to do and touch things around, the tour would have been perfect. Not that I did not, but it wasn't enough.


The room that I liked was the archive with the books dating from 400 years ago. We were forbidden to take pictures there. But at least there was a girl entering something from a book on an excel sheet, and I took a closer look at the book. I wish I could grab it and go. The tour lady told us that they are working on digitizing all the books they have. There were many around the walls on the shelves. Wish I knew what are they hiding.
I don't want to give away all the information I god. Some of you may really visit it, some of you have already done it. Whatever is your opinion feel free to comment? Read more of my stories on Travel Story Post.
Tags
Malta Museums