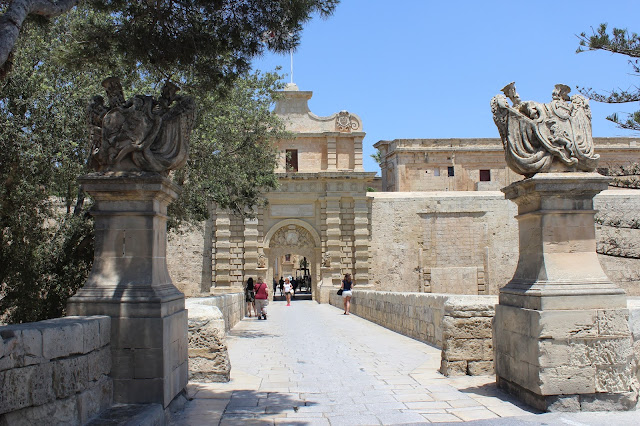 Where did they film Game of Thrones in Mdina?

All the fans of Game of Thrones must know that some of the scenes of season 1 were filmed in Malta. There are several Game of Thrones filming locations in Malta and also Gozo which can be seen in the scenes of the serial, like the one that took place in Kings Landing, and the Dotraki weeding and Essos.

If you have some time for a tour around the Silent City, go and see where the famous scenes took place. This was quite an exciting journey. I took some screenshots from the episodes and tried to find the exact spots from the scenes. In the pictures below you can see the difference between the movie set and the reality. For a moment the awareness that the actors were there brought an amazing feeling.

You can start with the main gate of Mdina, which in the series presents one of the entrances of King's Landing. Over here is filmed the scene in the third episode Lord Snow, when Catherine Stark arrives in the capital.

Next, you will see the place where another scene was filmed, presenting Littlefinger's brothel. Over here was also filmed a scene from the third episode, when Ned Stark goes to meet his wife.

A found out that another scene was filmed at St Dominic's Convent in Rabat. I've never been here so this was a wonderful opportunity.

Malta is considered a great place for movie sets. It offers a variety of scenery from medieval and baroque styles, and many other spectacular landscapes and historical moments. I find this an interesting thing to do, so I hope in the near future I visit other filming locations and I will share them with you. I've already visited most of the places. Take a look at Assasin's Creed scene preparation photos that I took in Valletta.

Read more of my adventures on Travel Story Post.

3 Things to do in Paris